Putting the concept of "retirement" on pension

I heard an investment ad for on the radio this week "you only get 480 paycheques in the average lifetime - followed by 300 paydays with no paycheque."

What a crazy idea! This model is OVER and it is time to align our thinking and life planning for 21st century realities. If you add the 240-odd months for which middle-class children go without earning income to the above insurance salesperson's scenario, you get a situation where income earning is crammed into less than half a lifetime. While this may help sell pension investments, it lays bare an unsustainable life pattern for the 21st century.

As healthy life spans extend towards 90 years and beyond, the idea of retirement at 60 is exposed for the anachronism it is. Why in the world would we jam-pack our creativity and earning capacity into less than half of our lives? It can't go on and it won't.

Why would anybody design a business model in which you spend money for 90 years and only earn income for 40 of these years? And it is not as if people are at their smartest or most focused in those 40 years. Typically they are busy mating, raising kids, having marital dramas and very driven by ego concerns - a cocktail that certainly tends to force them to work for an employer but doesn't necessarily buy their full attention to their jobs.

In the 21st century, people continue to be creative, engaged and bringing useful wisdom and focus to the world way beyond traditional 20th century retirement age - and earning income as they do it. One of my friends recently started a very successful business at the age of 79 - and his business is thriving as he turns 81!

Last week I saw a financial planner whose nifty software suggested that if my wife and I stop working at 65, we will run out of money before we get to 90 years old; if we continue earning at half our current rate for an additional ten years then we can safely stay alive to 100 without resorting to bread-and-water or cadging off our kids.

In my lifetime the concept of retirement is already crumbling. In my children's generation the "portfolio career" is taken for granted. People in the 21st century work flexibly over most of their adult lives.

So it's time to put retirement on pension. What I wonder about is:

Posted by Mish Middelmann at 11:13 No comments:

Why a systems approach is essential in business coaching

Reading Marc Kahn's brilliant new book, Coaching on the Axis, I am struck by the crucial role of a systemic approach in ensuring that business coaching results in "the promotion of success at all levels of the organisation by affecting the actions of those being coached." Backed by a strong theoretical foundation and his wide and deep professional experience, he points out that 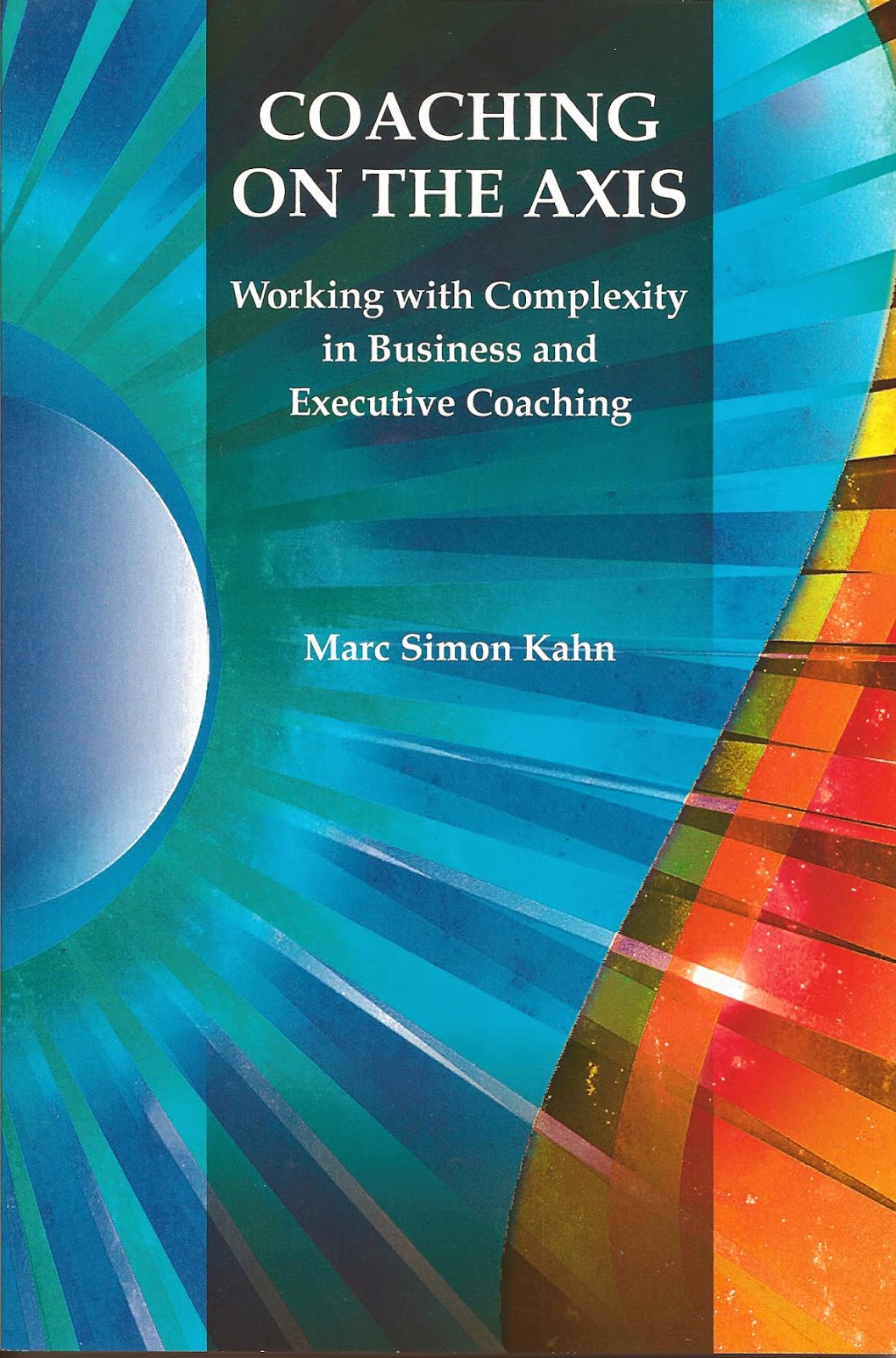 I found fascinating Kahn's examination of role and systems theory in relationship to business coaching - building his "Coaching on the Axis" model that highlights the relational engagement between the personal goals, gifts and passions of the employee(s) and the organisation's goals and measures of success. Role theory really helps make clear that in a relationship, all parties influence both the design and the outcomes of roles. Systems thinking helps us see that "the idea that one exists as an individual outside of a system is ... untenable" as we all exist in layers of nested systems from the tiniest building blocks of atoms and cells through to the cosmic scale of the universe.

His recommendations for coaches to correct the misalignment between business and coaching are
Kahn's positions provide food for thought to any coach working in organisations, and useful business and theoretical underpinnings in particular to coaches working within the paradigm of Organisation and Relationship Systems Coaching (ORSC).

Posted by Mish Middelmann at 14:40 No comments: